Treatment of breast cancer aims to reduce the chances of local recurrence and the risk of metastatic spread of the disease. Early detected breast cancer almost always involves a surgical approach which is usually followed by radiotherapy.  Further systemic therapy which includes hormone therapy and chemotherapy is also introduced in cases that involve positive axillary lymph nodes which can lead to metastatic relapse of the disease.

On the other hand in advanced, metastatic breast cancer where surgery is unlikely to be beneficial a palliative treatment is preferred instead which aims to soften the symptoms and improve the quality of life rather than curing the underlying disease.

It is a radical mastectomy which is performed in cases where large or centrally located tumours or tumours that involve the nipple are present, multifocal disease or in cases where there is a recurrence of cancer. During this surgical procedure the whole breast containing the tumour removed together with all the fat fascia and lymph nodes of the axilla and the wound is drained. The muscles supporting the breast are preserved and the surgeon has to dissect around or through the pectoralis major muscle that lies over the axilla while making sure the nerve supply to the muscles and the axillary vein are preserved. The intercostal branches supplying the breast are usually cut during the operation which leads to changes in the sensation of the chest area after the surgery.

This procedure does not involve the removal of fat, fascia and all the lymph nodes of the axilla. A small portion of the lower group of the axillary nodes is removed together with the axillary tail of the breast. Simple mastectomy is indicated when there is no evidence of axillary node involvement (in situ tumours).

During this procedure the tumour is removed together with an at least 1cm in thickness rim of surrounding tissue and is usually combined with a separate axillary surgery to reduce the risk of metastatic disease. This procedure must not be confused with lumpectomy which is performed on benign tumours. The recurrence rate is higher after conservative surgery and more common among young women and in cases of high grate tumours.

During this procedure the complete tumour bearing segment of the breast is removed. Similarly to wide local excision it is combines with separate axillary surgery and radiotherapy.

Axillary surgery is aiming to remove axillary lymph nodes that contain cancerous cells that can act as metastatic ‘hot spots’ and possibly cancerous axillary tissue. When wide local excision or quadranectomy is performed the axilla is dissected through a separate incision.

This technique uses a blue dyed radioisotope which is injected in the lymph vessels around the nipple or on the axillary side of the cancer pre-operatively, thus unveiling the primary nodes draining the area with the help of a gamma camera. After the detection and excision of the susceptible (sentinel) nodes histological analysis can be performed to determine whether the lymph nodes contain cancer cells. If the sentinel nodes are void of cancer cells the axilla is not dissected further. 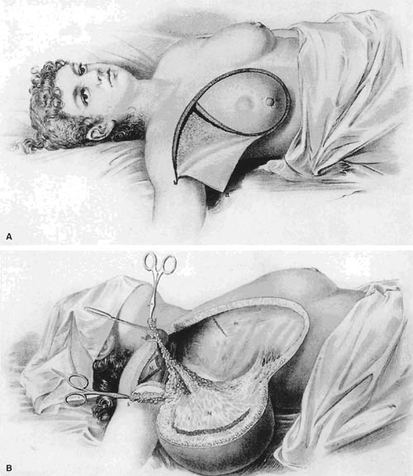